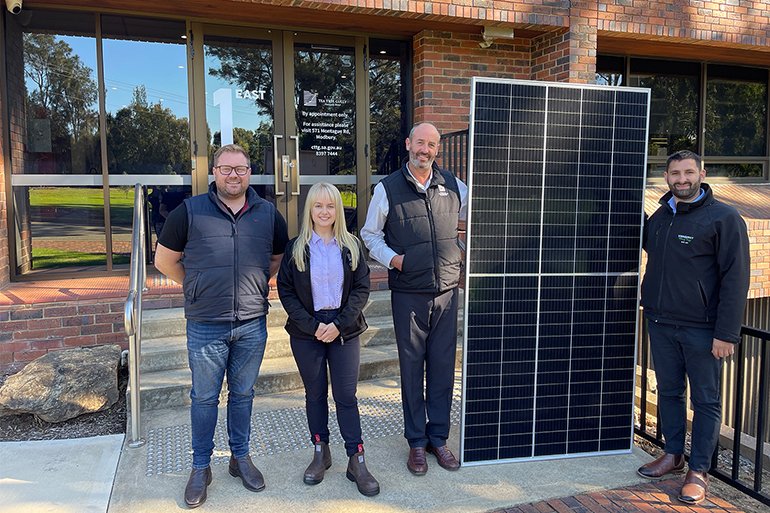 The City of Tea Tree Gully in Adelaide is set to step up its solar power capacity with the installation of an additional 100kw of solar panels for its service facility, which will save hundreds of thousands of dollars over the next decade.

Venergy is pleased to be selected as the solar EPC (Engineering, Procurement and Construction) provider for the design, supply and construction of the City of Tea Tree Gully Service Centre Solar Energy Project in Golden Grove, SA.

Matthew Wilkins, the CEO of Venergy Australia, attended the project initiation meeting with the Building Project Officer, Brittany Fleet and the Environmental Project Officer, Andrew Moylan, from the City of Tea Tree Gully.

The City of Tea Tree Gully conducted a competitive two-stage tender process to evaluate competing providers and announced Venergy as the successful solar EPC supplier after careful consideration. Works will begin in June, 2022, with construction and handover expected to happen the following month.

“Venergy is proud to be partnering with the City of Tea Tree Gully on this project. We have established ourselves as a credible provider to LGA’s by demonstrating previous experience with an impressive track record. Our engineering drawings and technical specifications were explained very well in the submissions, which was a leading factor in being selected as the successful vendor.” The CEO of Venergy, Mr Wilkins, said.

The new installation will provide a big boost to the council’s solar energy capabilities, which were previously only at 100kw capacity and will now boast a 200kw of on-site solar generation. Increasing the size of their existing system is in line with the council’s commitment to minimising consumption of non-renewable energy and achieving net-zero emissions.

The City of Tea Tree Gully has shown tremendous leadership with a clear ambition to adopt and invest in renewable energy and create local jobs.

“Venergy stands out for its professionalism in solar EPC project management and high-profile track record. We are proud to build strong, long-lasting and meaningful relationships with local organisations like the City of Tea Tree Gully, to deliver and play our part in their renewable journey.” Mr Wilkins said.

He did it! Our Commercial Bid and Strategy Manager, Curtis Montgomery, was one of the 100 brave souls who abseiled 70 metres down the InterContinental Adelaide on 17th September 2021 and had an absolute blast. He and the Venergy Australia Team have raised over $1,160 for Ronald McDonald House Adelaide to help and support seriously ill and injured children and their families.

Well done, Curtis! We are so honoured that you took part in the 2021 Adelaide City Plunge, and thank you for your amazing fundraising efforts.

All of Adelaide City Plunge participants have raised over $165,000 for RMHC SA, which equates to more than 1,040 nights’ accommodation. Congratulations and thank you RMHC SA and Zenith Events for such a great experience!

You can still make a donation to this incredible cause by visiting this link: https://ronald-mcdonald-house-charities-sa.grassrootz.com/adelaide-city-plunge-2021-rmhc-sa/venergy-australia?fbclid=IwAR29XCBCZAe4JngyKqEfrcQ11Cx-VY6qxyMEbghsOuAoxyeGzQna_56J9uc

On what was the wettest night on record in five years, Venergy CEO Matthew Wilkins braved the conditions on 17th June sleeping outside in Adelaide, smashing his $10,000 fundraising goal with $16,500 in the 2021 Vinnies CEO Sleepout.

Nodsmil practices his Electrical Engineering profession in the field of Solar PV Systems focusing on designing full system sizes ranging from 100kW up to multi-MW projects. With 6 years of experience in the Solar PV Industry, Nodsmil has delivered numerous and complex PV projects across Australia and he is able to take charge in different technical aspects of the project starting from the sales stage, up to construction stage.

His tremendous knowledge and valuable experience in doing the full system design of PV Systems is creditable. Nodsmil is a Licenced Professional Engineer, a Photon International Solar PV Professional Qualifier and has held diploma from TAFE in South Australia.