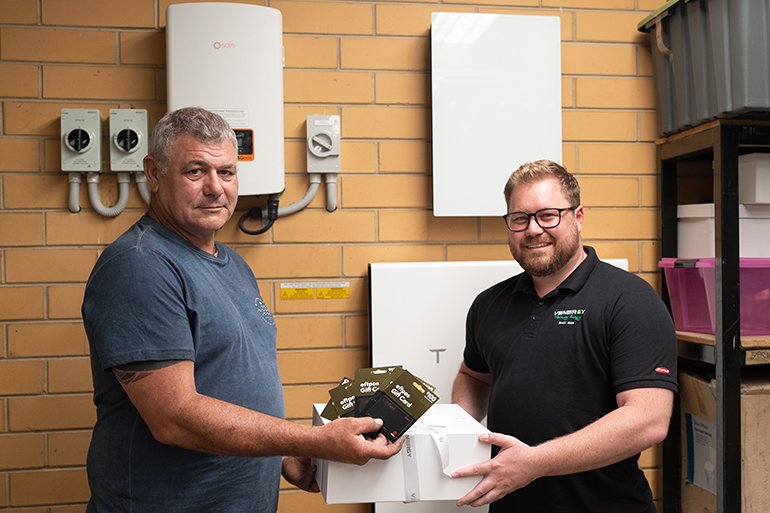 Mechanic from Morphett Vale named 2021 Venergy Ambassador of the Year

Scott Winen, a mechanic from Morphett Vale in the region of South Australia, has been selected the first Venergy Ambassador of the Year Award winner.

The Ambassador of the Year Award honours our most loyal customer who have gone over and above to refer their friends and families to Venergy Australia!

Winen’s commitment to the mission of Venergy Australia, as well as his successful referrals, ​made him an obvious choice for being recognised as Venergy’s biggest advocate in 2021.

Scott, who has not only bought two Venergy solar systems but also referred 12 people to the company, said: “The reason I refer Venergy Australia to friends and family is because I had a great experience with Venergy . They looked after me in quality and price. I’ve referred 12 people to Venergy – all of them have followed through – good customer service. All of them, I’ve spoken to haven’t had any complaints whatsoever.”

In appreciation of his efforts, Venergy CEO, Matthew Wilkins, has awarded him gift cards and a Venergy hamper.

Our Referral Program is easy, simply follow the link, refer a friend and be rewarded for your loyalty – Could you be our 2022 Ambassador of the year?

He did it! Our Commercial Bid and Strategy Manager, Curtis Montgomery, was one of the 100 brave souls who abseiled 70 metres down the InterContinental Adelaide on 17th September 2021 and had an absolute blast. He and the Venergy Australia Team have raised over $1,160 for Ronald McDonald House Adelaide to help and support seriously ill and injured children and their families.

Well done, Curtis! We are so honoured that you took part in the 2021 Adelaide City Plunge, and thank you for your amazing fundraising efforts.

All of Adelaide City Plunge participants have raised over $165,000 for RMHC SA, which equates to more than 1,040 nights’ accommodation. Congratulations and thank you RMHC SA and Zenith Events for such a great experience!

You can still make a donation to this incredible cause by visiting this link: https://ronald-mcdonald-house-charities-sa.grassrootz.com/adelaide-city-plunge-2021-rmhc-sa/venergy-australia?fbclid=IwAR29XCBCZAe4JngyKqEfrcQ11Cx-VY6qxyMEbghsOuAoxyeGzQna_56J9uc

On what was the wettest night on record in five years, Venergy CEO Matthew Wilkins braved the conditions on 17th June sleeping outside in Adelaide, smashing his $10,000 fundraising goal with $16,500 in the 2021 Vinnies CEO Sleepout.